Taking place around the 1930’s, in the English countryside, the three children in The Railway Children, by Edith Nesbit, try to cope with suddenly becoming very poor. As they worked at the transition from rich to poor, they had many scrapes with the railway, a couple of tough spots that they didn’t know what to do, and taught me a couple things. Now I will look at the things that showed that they were very poor.

This book may be called The Railway Children, but it is really how the children in the story cope with being poor. They couldn’t have both butter and jam, they could only have one or the other because they had a bad income. They did not have enough for buns and tea most of the time. The children could not get jobs, and couldn’t find odd jobs to do. Mother became ill, and they had to beg because of a low income. They had no crop to feed themselves with because it was too cold to grow some crops. They did not have all the servants to do household tasks for them; they had to do it themselves. In all, they did not have very much money, and could barely pay for the house and the financial crush they were under was huge.

Peter, Roberta and Phyllis each showed their courage. Roberta showed bravery when she accidentally jumped a train, trying to fix Peter’s busted toy engine. Roberta again showed her courage in the tunnel staying in the manhole in the tunnel with Jim. Peter showed his bravery when he ran into the burning barge to save a baby dog from being cooked alive. Peter also was not scared when Phyllis said to go up to the box office to get help. Phyllis braved the darkness of the railway tunnel. Phyllis also was not scared of trouble with the tunnel incident. All three had to be cautious about trains passing by in the dark tunnel. They all had a lot of bravery to do those things that were frightening.

I also learned a couple things, as well as liking others. I learned that the children sometimes called their mom mum, mummy, or mammy. Also, the British use sayings like “you’re a brick” differently than Americans do. I liked the part where Peter calls the stationmaster a brick right near the pile of coal bricks. Oh, the irony of it! My favorite quote is Roberta saying, “What useful things flannel petticoats are! The inventor of them ought to have a statue directed to him!” I learned some new retorts for arguments. I learned that this takes place during the Great Depression, at around the 1930’s, which is around the time the car was invented. There were many things that I was not aware of before reading the book.

They had many of the scrapes with the railway, I found out a major character trait about them, and I looked at the things that I learned from the book. I think that this book is an excellent children’s book, and the end is very dramatic. This book is a good one for children as they will learn things about the english culture.

Gary North will give a video on how to save almost $20,000 on college expenses. I have put it here so anyone can see.

There is a whole curriculum that I am getting all these lessons from, and the Ron Paul Curriculum link shown on the right of this page will take you to the home page. If you are a parent and thinking of using a new curriculum, please use this affiliate link and check out these classes.  If your son(s) are going into college or preparing to do so, if they take the curriculum it will make it a lot easier, especially if you go to ABC; Academic Boot Camp.  Later on they will thank you for making it easier in college.

How I think The Railway Children will End

I hope that the end of The Railway Children, by Edith Nesbit, will bring home Peter, Phyllis, and Roberta’s father. I think that their father was on business in Liverpool, U.K. The two men may have came to give him a confidential package to ship to a residence in Liverpool. Liverpool may have been hard to find, which is why it took so long. After he found it and delivered the package, he missed the train 5 times in a row. Liverpool was far away from Three Chimneys, the name of the second house. It took a while for the train to go to the stop near Three Chimneys, then he had to walk all the way to the House, also also getting all his luggage up and into the house. I think that he will tell his story at the end, and the children get to know where he was all along. So after we find out that all is well, we find out how the return of the father affects the family.

There were enormous differences in their lives when father returned. For instance, they were no longer struggling under the financial crush they had been under the entire time. They loved their father a lot more, since he had been gone for a while. As Father was home they had a bigger income, so they had electricity again, the mom had time to play again, they had money for food, they had coal all the time, and they were able to learn more about the railway. They lived without many of these things and many others; they struggled to even get food. I hope the book doesn’t leave them struggling. 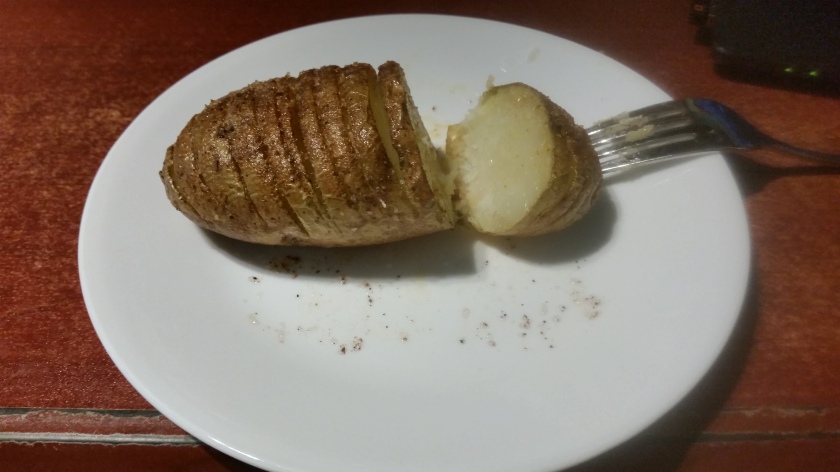 This is a sliced baked potato. It is very good and I think you should try it, and it’s fairly simple to make!  2 russet potatoes, Olive oil (enough to spread over potatoes), Organic butter (enough to spread), some black pepper, some sea salt, a serrated knife, a cutting board, and an edged baking sheet should do the trick.  First, put aluminum foil on the baking sheet and spray some PAM® on the aluminum, and preheat the oven to 400°F.   Second, cut the potatoes not all the way through, but most of the way.  Third, put the potatoes on the baking sheet and drizzle the butter, oil, pepper, and salt on the potatoes.  Then place the whole array in the oven (preheated by now) and cook for 40 minutes.  Once time is up, they’re done!

Today, I made Homemade potato chips !  I needed three russet potatoes, a couple of handfuls of Himalayan sea salt, some olive oil, a mandolin slicer or knife, a baking sheet, and some baking spray.  first I preheat the oven to four hundred degrees, and put foil on the sheet and spray it, and cut up the potatoes. Then I mix the olive oil, salt, pepper, and cayenne pepper, then I dunk the potato chips in the mix, and toss, then place them on the tray. into the oven they went, and since I used a mandolin slicer set to 1/8 of an inch, in fifteen minutes, they were done!  if you use 1/4 inches, then they go for half an hour, but don’t forget that.  these are delicious and healthy, although they’re not very fast unless you have the eighth inch slices. 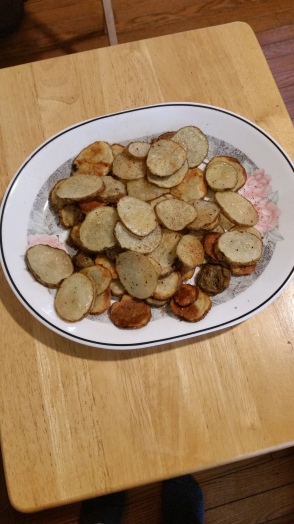 Search For One Of My Posts Here!